Kicked Out, Arrested For Drinking Coffee at Yorkton, Saskatchewan Walmart 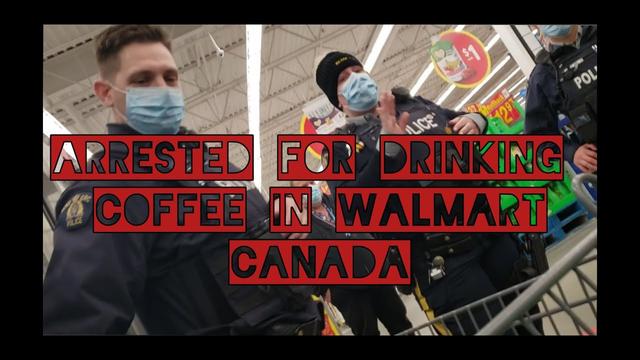 When we walked into Walmart both Mike and I had our masks on but were finishing the bottom half of Tim Hortons coffee we had from dinner. We figured that it shouldn't be an issue since there is a McDonald's in the building that serves hot, fresh coffee to the customers who come through the Walmart to shop. There are no signs anywhere that states we are unable to eat or drink at all under any circumstances in the Walmart isles, yet we were centered out for sipping a coffee. This same Walmart had an anniversary where they had cupcakes sitting on a table free for any customers to take and eat. Doing so would require those to pull their masks down to eat, which the Walmart staff would permit.

Whether we were sipping McD's soft drink from a meal we ate or finishing up or a Timmies coffee; whether we put a piece of gum in our mouth or needed an inhaler, other people are walking around with masks half down and others pull down completely to talk when they feel the need, why follow us around over a coffee? It doesn't even last long and we put our masks up in between anyways, the cameras would show that.

The manager (I'm guessing) walked up to Mike and said he needed to wear a mask. Mike said sure but I'm finishing a coffee and mandates aren't laws, we aren't breaking any law finishing a coffee.
I had my mask down right at that very moment (of course at that moment 😒) so Mike could hear me as I was pointing at a fuzzy pillow up on a shelf a few feet away. So I set my mask back over my nose and walked over. He wanted us to keep the masks up anyways so Mike said he was acting like a Nazi. The manager said that doesn't matter just keep the masks up, so we proceeded to let him know that acting like a Nazi could turn around on him as a liable manager just like it was all turned around on shop owners and Nazi's in the not so distant past. They were charged, jailed, hung, shot and more over "just doing their jobs" and even today things can turn around.
Thats when he got mad and said, "well you can get out of my store then, I'm calling the cops" and proceeded to begin walking down an isle, changed his mind and backed out of it to go down the one we were in and pressed himself up against me in order to get me to move (doesn't he care about social distancing). So I stood firm and said, "excuse me, you didn't need to turn this way and push me, you can go around." which flustered him even more having to go around.

We put a few things in the cart and then the officers showed up with the manager. Its too bad the phone camera shut off during our walk out, but thats alright. They said the usual, "you have a right to remain silent and anything you say will and can be held against you," which I'm sure seemed intimidating to the onlookers. I said, "There's nothing I've said or am saying wrong so that doesn't even matter."
When we got out I slipped out of the one cuff, he didn't really tighten it which I knew but he also didn't even need to put them on me in the first place, it was just a show, which he also said. I so wish my phone kept recording. Ross (female officer) said we weren't even allowed in there anyways without a va ccine passport, to which Colman replied "no, not here they don't".

Read over the pdf and don't miss where it reads:

"The citizens of Canada are protected under the medical and legal ethics of express informed consent, and are entitled to the full protections guaranteed under:

Citizens are under no moral or legal obligation to comply with any Orders to subject themselves to an experimental
treatment. Neither you, your staff, or contracted security have been directly deputized by the government to enforce
their unlawful orders...

Your participation in enforcing the unlawful acts of the government makes you complicit and therefore,
personally liable. The Nuremberg trials are evidence that, “I was just following orders” was not an acceptable
defence and will not exonerate you from responsibility."

Here's the link for the PDF: https://action4canada.com/notice-of-liability-vaxpass-biz-owner-staff-security/

The Shadows of Power: The Council of Foreign Relations And The American Decline
CDN$ 31.92
View on Amazon
(171)