Well known Canadian Truther Makhan Singh Parhar, known as FlatEarthFocker on social media and the Truther Community, has died as reported on by Kelowna, British Columbia, Canadian based Castanet.net website.

The video above was posted on Twitch the day before he was found dead.  Didn't look or sound out of the ordinary.

The article on Castanet reads as follows:

A British Columbia man who gained notoriety and the attention of the justice system for his stance on COVID-19 protocols, Makhan Singh Parhar, has died.

Parhar was a prominent COVID-19 denier and flat-earth conspiracy theorist who was arrested for violating the Quarantine Act last year and was in the midst of a court case for refusing to self-isolate after returning to British Columbia from a flat earth conference in the U.S. in 2020.

CTV News Vancouver is reporting the BC Coroners Service is investigating the circumstances around his death. Parkhar was found deceased in his Sapperton neighbourhood home Thursday morning.

In a video posted on Wednesday, Parkhar said he wasn't feeling well, describing COVID-19 like symptoms. In the video, he claims to have taken Ivermectin, the anti-parasite drug health officials have warned against using as a treatment for COVID-19.

The BC Coroner Service is obliged to investigate all sudden deaths in the province. An official cause of death has not been released yet.

-with files from CTV News Vancouver

FlatEarthFocker videos can be seen on Twitch, Instagram, and Odysee, at the following links:

The Truth Community will miss deeply the passing of this great Canadian Truther!

Christopher Jame's from the website A WARRIOR CALLS has a video in memory of Mak Parhar.. 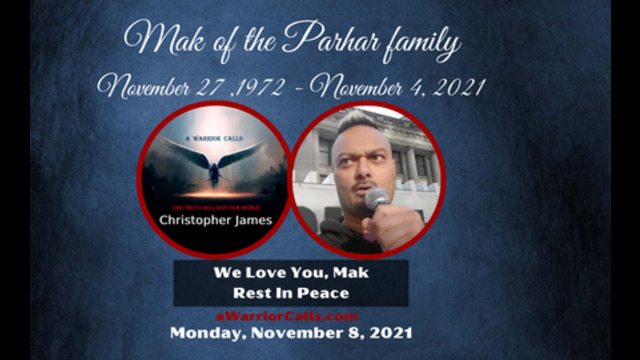 Here's a an important message for the Truth Community from Brian S Staveley from the Dose of Reality Channel on Rokfin about Flat Earth Focker...