Not in His Image (15th Anniversary Edition): Gnostic Vision, Sacred Ecology, and the Future of Belief

“Lash is capable of explaining the mind-bending concepts of Gnosticism and pagan mystery cults with bracing clarity and startling insight. . . . [His] arguments are often lively and entertaining.”—Los Angeles Times

Fully revised and with a new preface by the author, this timely update is perfect for readers of The Immortality Key.

Since its initial release to wide acclaim in 2006, Not in His Image has transformed the lives of readers around the world by presenting the living presence of the Wisdom Goddess as never before revealed, illustrating that the truth of an impactful Gnostic message cannot be hidden or destroyed.

With clarity, author John Lamb Lash explains how a little-known messianic sect propelled itself into a dominant world power, systematically wiping out the great Gnostic spiritual teachers, the Druid priests, and the shamanistic healers of Europe and North Africa. Early Christians burned libraries and destroyed temples in an attempt to silence the ancient truth-tellers and keep their own secrets.

Not in His Image delves deeply into ancient Gnostic writings to reconstruct the story early Christians tried to scrub from the pages of history, exploring the richness of the ancient European Pagan spirituality—the Pagan Mysteries, the Great Goddess, Gnosis, the myths of Sophia and Gaia.

In the 15th Anniversary Edition, Lash doubles down on his original argument against redemptive ideology and authoritarian deceit. He shows how the Gnostics clearly foresaw the current program of salvation by syringe, and places the Sophianic vision of life centrally in the battle to expose and oppose the evil agenda of transhumanism, making this well-timed update more relevant than ever.

“Sometimes a book changes the world. Not in His Image is such a book. It is clear, stimulating, well-researched, and sure to outrage the experts. . . . Get it. Improve not just your own life, but civilization’s chances for survival.”—Roger Payne, author of Among Whales.

Not in His Image (15th Anniversary Edition): Gnostic Vision, Sacred Ecology, and the Future of Belief
CDN$ 33.84
View on Amazon
(398)
If TRUTH and FREEDOM means something to YOU.. SHARE THIS!

What Really Makes YOU Ill?

<< RETURN TO MAIN PRODUCTS PAGE
If TRUTH and FREEDOM means something to YOU.. SHARE THIS!

VIEW REPORTED SIDE
EFFECTS IN CANADA 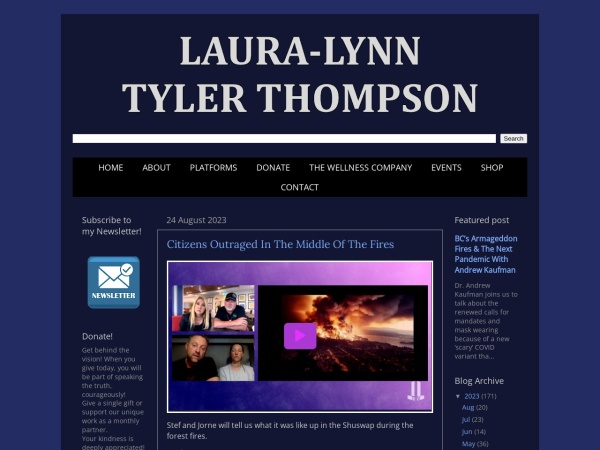 What Really Makes You Ill?: Why Everything You Thought You Knew About Disease Is Wrong
CDN$ 44.34
View on Amazon
(1159)